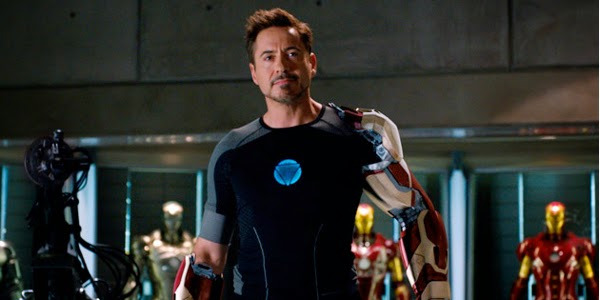 There is A LOT of movement in the Marvel Cinematic Universe as of late, and today alone has provided us with some huge developments involving the still-under-wraps Captain America 3. Not only did we find out that the Civil War storyline is going to start up with the third (and final?) Captain America film, but also that Spider-Man might be involved in the future. Of course, this was all trumped by the announcement that Robert Downey Jr. will be on hand as Tony Stark in the next Steve Rogers adventure, which not only signals big happenings but also a big pay day. The reported figure is $40 million-plus.

Thanks to Variety, we now have an idea of just how big of a pay day he'll be raking in after his recent negotiations. So how much does it take to hire Robert Downey Jr. for an appearance in a Marvel movie? Well, if the past is any indication, $50 million would be the number to beat. That was the figure Marvel Studios signed over for Downey Jr.'s participation in The Avengers.

Of course, that's not how much Robert Downey Jr. will be banking for Captain America 3, as Variety's sources say he's signed on for a $40 million pay day up front, in exchange for an expansion of his role in the film. Originally, Tony Stark was going to be a bit player in the next Chris Evans led film, but Downey Jr. expressed that he wanted a meatier part in what promises to set Marvel Studios up for the next couple of phases. However there is a way that Iron Man could be bringing home something extra when this is all done and over, as he's reportedly negotiated a portion of the film's backend profits.

In addition to receiving a cut of Captain America 3's profits, there's a clause set in Robert Downey Jr.'s contract that will put him in line for another pay out if the film breaks the franchise's record. So if Captain America 3 exceeds the $714 million total gross that Captain America: The Winter Soldier brought in, Downey Jr. will receive an extra pay out, presumably for making that happen. It's not a bad assumption, as Iron Man is still the highest grossing stand-alone hero in the Marvel Cinematic Universe, and the Marvel/Robert Downey Jr. brand is at peak output as we speak.

As far as what Robert Downey Jr. has brought to the table for Marvel Studios, the agreement to pay him in such a manner is well deserved. If his role in Captain America 3 was maintained at the previous level of involvement that was denoted, it could be seen as a bit exorbitant, but seeing as he's now playing an official lead role, he'll be earning every penny. No matter the scenario, Downey Jr. looks like he'll retire/scale back his involvement in the Marvel Cinematic Universe within the next couple of years. If he wants to go out with a bang, and get paid in the process, he's well earned that right by consistently delivering for Marvel Studios.

No matter how you slice it, Captain America 3 is going to change everything, and if the rumors are true and the stars and stripes align, Joe and Anthony Russo will become the next masters of the Marvel Cinematic Universe with The Avengers 3 and 4 in their care. Captain America 3 breaks the mold on May 6, 2016. Your move, Batman v. Superman: Dawn Of Justice.
Posted by News Updater at 12:24 AM